Hidden Resources – Your Problem or ‘The Ace Up Your Sleeve’ 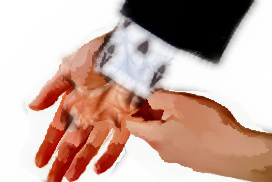 One of the tools professional innovators use is the idea of resources. There are always hidden resources within a system (social system, financial systems, and technological system, etc.). Finding those resources and using them in new ways will allow change to take place.

Having said that, there is still a problem – the resources are hidden – as previously stated. The reason they stay hidden is

because the cultural momentum hides them. A socially dominate subtextual idea is so strong and pervasive, it’s hard to image. How do you fight your own brain.

Subtext (the message below verbal communication) is never spoken because it is assumed by all to be true on an institutionalized level. Institutionalized issues are to a culture as the unconscious is to an individual. Let me give an example.

American racism is institutionalized. It is so much a part of the dominate culture, we are unaware of how each of us supports it, even unintentionally, even when it is the last thing we would want to do. I used to buy Band-Aids. Did you even notice that they are “flesh-colored”?  They are made that color so they blend in – are not noticeable. For example, a man nicks his neck while shaving and puts on a small Band-Aid to stop the blood and no one really notices. QUESTION: What’s the subtext here? (In other words, what is the hidden resource for institutionalized racism?) ANSWER: The Band-Aids are pinkish-light brownish-pale colored – the “correct color” of skin. If a black man nicked his neck and put on that Band-Aid, it calls attention to his mistake. The Band-Aid shouts out clearly and without words that this man is not the right color.

Once I realized this, I never bought another “flesh-colored” Band-Aid. I now buy Dora the Explorer or Scooby-Doo or Teenage Ninja Turtles or anything else because I refuse to participate in the fallacy that there is a correct color of skin. Of course, I’ve written the company and now I’m blogging about it; but the fact is, in America, we have hundreds of these hidden resources that strengthen our institutionalized racism and I haven’t discovered them all yet.

So one of the important jobs of the social change-maker is to identify the problems you wish to change and then dig out the subtext of support – the hidden resources – that will strengthen resistance to your improvement. Sometimes, people outside of the situation can see the subtext better. Sometimes it is a leader within the culture (where ever they exist along the “hierarchical ladder) that will have been immersed in the institutionalized problem and has woken up and will not accept it anymore.

What is needed is a compelling new point-of-view. This is the first step of any social innovation. To think outside of a box, you cannot let the subtext of the situation tell you “The box is all there is.”